All right people, check it out, this is Dyce Kimura and I am a Miami advanced guitar teacher at your service.  I am re-tubing one of my amps at this point, these just came in the mail, these are preamp tubes, 12 87,   I’ve got two 12 87 from TAD, Tube Amp Doctor and I got JJ ECC 832 gold from JJ obviously, and I’m going to re-tube my fender amp and just walk  through a few things, some of these things may be obvious to some of you more seasoned players, but I get a lot of questions on how to re-tube an amp. I’m only going to re-tube the preamp tubes and I’m going to do the power tube and do the biasing in a separate video. So some of you know that you’ve got to be careful with the biasing for the power amp tubes, you need to make sure that the power is evenly distributed in all the tubes so you don’t fry one tube more than the other and there’s also some serious health risk, you can get a serious electrical shock, so I’m going to cover all that in a later video.

So notice on my amp, it’s off, it’s been off, it was actually on and I’ve just been cooling it for about 30 minutes, so I’m just going to reach in and just yank them out with my fingers, these are my preamp tubes here, this is V3, the V2 and then the V1 position. So I’m going to start now  and  I’m going to put one of these TAD in the V1 position, just before I put it in let’s check this and compared it with the old TAD. Now, I’m comparing these two and this tube doesn’t look burnt out at all, the silicone actually looks pretty good; so if you look here, this is the amount of silicone there is, this is the old one and this is the new one and actually believe it or not folks, the new one looks like it has less silicone than the old one, which is not a good sign, but these just came in the mail, I’m going to give them the benefit of the doubt and I’m going to give them a and if they are working well then I’ll try… Right now I’m just getting a lot of microphonic in the amp and if you are experiencing that you may want to change them. 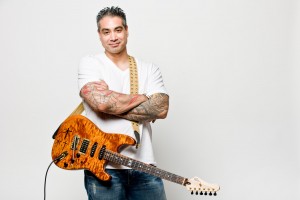 By the way people I am Miami advanced guitar teacher doing lessons all day and available for booking.  All right, so let me see if I can stick this in here, I’ve got to straighten this pain out because it’s bent somehow and then try to stick it in, these pins get bent, they get really hard to stick in there, let me just get down there a little more. This next one I’m using a JJ gold, this is for the V2, most amps for V1, V2 are the same like a 12 87 tube with 6L6 power tubes, but this is a custom-made amp, I had it custom modified by Bill Hemp. Usually the tube that’s different is going to be like on these bigger amps like this super reverb or the deluxe reverb where you’ve got to phase inverter in the V6 position, you might use a 12 instead of the 12 87 like a 12 AXU, I forgot what it’s called, and that’s it, I put the 3 tubes in.  I am a Miami advanced guitar teacher and I use this am a lot during lessons.  Let me just put my camera back here and now we can see… Amp turns on, I’m going to look in the back, I’m going to look for these tubes to fire up, they’re all glowing nicely and I put these old ones… I save the old tubes by the way, I just mark them as old and I save them and I can use that sometimes to troubleshoot problems with the amp. Excuse me while I get my trusty strap here and I’m going to fire this up [testing the amp using guitar] so I’m already noticing a very clean sound, you can hear it, just a continual hiss [unfamiliar word] nothing, right? that’s really good, no sounds come out of the amp and I’m not get any microphonic noise, I was getting like a 60 cycle hum and little popping noises from electrones that were just neutralizing and syphoning and just spinning around in the speaker [playing guitar] but this sounds good.

Now, the reason I stopped and I didn’t just… this amp take three 12 87, well, a preamp tubes two of them are 12 87 and one of them was the JJ ECC f832, but I also have two power tubes which I have upon the shelf, brand new, but I didn’t change those yet and I told you to change those I have to buy some, but I also waited. As a Miami advance guitar teacher I really like vacuum tubes.  Now, power tubes last about twice as long as preamp tubes, so before I change the power tube I wanted to listen to the new tubes and see if I like the sounds [playing guitar] and sure enough, I’m liking what I hear, so I don’t need to change these power tubes. Power tubes are like, the set of like 6L6 is like $50 so that’s good, I don’t have to waste them yet, I won’t, but I have absolutely no amp noise now and so I’m happy there was just some dark… let’s try kind of driven [Playing guitar] and totally clean.

So that’s it, that’s how you change preamp tubes. This might sound obvious, but make sure you read your instruction manual on the guitar or ask your Miami advanced guitar teacher and if you’re pulling off a tube and this is the first time you’re changing tubes in your amp, as you’re pulling of the tube, keep note of which tube went in which socket, this is very important, pull off the tube if you got it from the manufacturer and write down what that name or serial number or markings for that tube or that socket was. The sockets have names.  If you need help with this ask your Miami advanced guitar teacher.  I’m just going to show you on my amp, this is the back of my amp, the power tubes are called power tube, those are the big ones, I don’t see that, these are the two big ones here and then immediately after the power tube the small tube after that is usually going to be on that right of the tube, that’s called the V1, then the next tube is the V2, the next tube is the V3 and depending on how many tubes you have you keep going you can have the V4, V5, V6, V7, the most I’ve had was up to V7, I think, in my 66 super reverb. And pay very close attention with what tube specks went into what slot so you want to get that exact one. Will it run if it’s slightly different? Yes, it will, tube amps is a lot like diesel motors, they don’t… They are kind of temperamental, they maybe break, tube amps maybe fair to say they break more than transistor amps, but they’re also very easy to repair. 90% of tube amp problems are the tubes, you just need new tubes, you could have issues like you’re feeding back on the reverb, you get a high pinging noise, you get like sounds of glass, like, tingling inside, these are microphic noises that are being pick up and amplified through your amp that are just problems inside of the tubes, tubes burn out and they need to be changed, just like light bulb.

So, why do I play a tube amp as a Miami advanced guitar teacher? Why go through the hassle of playing a tube amp? Well, once you get use to tube amp you just cannot go back to transistor amp, you just can’t, tube amps sound amazing, they sound warm. I use especially warm tubes; I use a TAD, Tube Amp Doctor, which is german tubes. A lot of amps nowadays, especially fenders, they come stocked with groove tubes, which I hate. Groove tubes have gotten a lot worst in the last 10 years, I grew up playing more groove tubes and I think they’re made in China actually and groove tubes nowadays – right now this video is in 2016 back when we were using groove tubes around 2013 or 2012, because I started noticing I’d buy groove tubes and, like, every other tube was a dud, like, it didn’t work, it would fry and it’s horrible, so they just don’t have really good product inspection, they just kind of ship out whatever, which is really disappointing. And then the actual tonality is pretty harsh sounding, in my opinion, and there are other tubes that I’ve used: JJ, I tend to not like either, they end to sound, in my opinion really harsh, even though… like I’ve said in other videos I’ve encountered some great players that love their JJ tube, so I give them all due respect, but personally I like the warmth of TADs. My friend Bill Macrome who actually designed the modifications of this blues junior told me to use the TADs and I’ve gone with that ever since. I also have used some other rare tubes like, RCAs and telefunken, if you can get a hold of those, those are worth their weight in gold.

So anyway, that’s how I change my preamp tubes and I’ll do another follow-up shortly on how to change power tubes in biasing, but this amp doesn’t need a power tube change at the moment, so I’m going to hold off on that just so I can maximize the old life on my tubes. And these tubes are…I mean, I play this amp about five days a week, 8 hours a day as a Miami advanced guitar teacher, so I should be good for another 6-8 months at least. To be honest though, I haven’t changed these tubes, I want to say at least a year and a half, so I’ve been long overdue, so we’ll see what I get out of these power tubes, but I know the preamp tubes has been about a year and a half. So anyway, if you play your amp everyday then you want to change your tubes completely, like, every couple of years, even if you play an hour a day, once a day, that’s like… I would, if you’re serious about your tone and you’re playing a set of five tubes, like three preamp tubes and two power tubes they’re going to run me about $125 okay. That being said, you can upgrade your speaker, there’s all kinds of stuff you can do to make your amp sound better, but the very first thing I usually do when I get a new amp is I’ll change the tube and I’ll change the speaker, usually I’ll change it to my preference. This video is more talking about tubes than speaker so I’m going to keep it on the tubes, but anyway, if you have any questions please just comment below and I’ll try to answer everyone’s questions. Feel free to subscribe, find me on Facebook and go to my website and if you liked it, give me a like button I appreciate it and I will see you at the next video, thanks for watching.  Check out this previous blog of how guitar teaching has changed in the last 30 years.

Make sure you fill in all mandatory fields. Required fields are marked *